There is often a lot of criticism and sometimes downright hate for Brazilian buses when you visit VW Facebook groups and from some VW enthusiast groups in general.  As is often the case on polarizing issues ignorance vs facts is the cause of confusion.  To many VW purists have out right hate for Brazilian buses.  Hate always stems from fear and usually from ignorance.

So why do some have a strong dislike and contempt for VW Kombis from Brazil?  Below is my speculation as you can’t say it’s absolute but I’m fairly certain of the underlying reasons:

All things being equal, would I rather have a German bus than a Brazilian bus?  Absolutely as the German bus has about twice the value from an investing point of view.  Buses from the VW factory near São Paulo are a slightly different bus with a different market and value than their German counterparts.  BUT, the smiles, waves and thumbs up that you get from passersby every mile or so (try stopping for gas without receiving a compliment) are the exact same for either bus.  Better said, the enjoyment you receive from your Brazilian bus is the same of that from the German made bus. 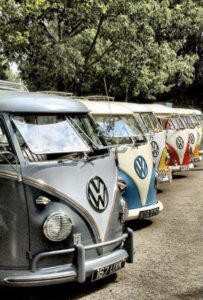 Hi! My name is Scott Mills and I'm the VW Bus Guy. I travel to Brazil to find and restore Kombi Buses (the Brazilian name for VW Buses).